On Nov 11, 2019, the Conservative Party announced rather unclear plans to take legal steps to ensure that inquest juries in Northern Ireland could not return verdicts of unlawful killing in relation to actions by UK soldiers (and presumably other state agents such as the RUC police) in operations during The Troubles. The plans also apparently include barring prosecutions for any alleged unlawful acts during such operations during The Troubles (there is no statute of limitations on serious criminal offences in the UK so this would be an entirely novel step).

Why has this become an election issue?

The background to the two cases:

In 1989, Patrick Finucane, a Belfast solicitor who had represented defendants charged with terrorist offences from both sides of the Northern Ireland conflict, was assassinated, during a family Sunday lunch, by a loyalist paramilitary gang, in front of his wife and three small children. Several independent inquiries found powerful evidence that the Army had colluded with the loyalist paramilitaries in the planning and execution of Finucane’s murder, and in its subsequent cover-up over many years (Sir John Stevens, Stevens Inquiry III: Overview & Recommendations (17 April 2003); Justice Peter Cory, Cory Collusion Inquiry Report: Patrick Finucane (House of Commons 2004; Sir Desmond de Silva QC, The Report of the Patrick Finucane Review (HMSO December 2012) ).

In 1992, Pearse Jordan, an unarmed Catholic, was shot in his back and killed by Royal Ulster Constabulary (RUC) officers during an antiterrorism operation.

In 2019, their families are still seeking justice.

This is also the case for the next-of-kin in the estimated 94 killings from The Troubles still awaiting inquests in Northern Ireland, known as the Legacy Cases.

In Northern Ireland, the Finucane and Jordan cases have become emblematic, given commitments by the UK and Irish Governments in the Good Friday Agreement 1998 and the Stormont Agreement 2014 to pursue justice for victims as part of reconciliation, in accordance with human rights. The Conservative proposals, however ambiguously framed, would appear to risk being in breach of those Agreements.

The Supreme Court determined in that pair of judgments:

All of these findings have implications for other inquests and police investigations which have not resulted in prosecutions, whether before or after 2000.

How can the HRA apply to killings before it was enacted, and specifically to The Troubles?

The UK Government contended that Patrick Finucane’s widow could not maintain an action in the domestic courts under the Human Rights Act 1998 since it came into effect only in 2000, 11 years later. The House of Lords had previously held that the HRA did not cover inquests into alleged ‘shoot to kill’ deaths in Northern Ireland in 1990 (Re McKerr [2004] UKHL 12) but this position had to be retracted when the European Court of Human Rights Grand Chamber ruled (Šilih v. Slovenia) that the state’s obligation to investigate suspicious deaths was “detachable” from the substantive Article 2 duty to refrain from taking life; moreover this procedural obligation could extend backwards to before the date when the ECHR came into force in a particular state. So The Troubles, having first been thrust outside the protection of Article 2 by McKerr, were potentially brought back within it by the UKSC in Re McCaughey [2011] UKSC 20. In Finucane, Lord McKerr accepted that sometimes it would be impossible to breathe “new life into a right whose currency had passed when all the circumstances constitutive of the interference with the right” had occurred prior to the HRA. But here significant procedural steps had been taken since then through the official (but not public) inquiries, and so there was a genuine connection between Finucane’s murder and the HRA’s commencement.

This conclusion potentially draws within Article 2 not just the Legacy Cases but other deaths and disappearances during The Troubles.

So what constitutes an Article 2-compliant inquiry? Why yet another inquiry in the Finucane case?

The Supreme Court explained what features police investigations and inquests must have to satisfy Article 2 – giving a wider significance to the Finucane judgment, to inquests elsewhere in the UK.

The Government contended that the previous inquiries, albeit not held in public and without the full participation of the Finucane family, satisfied its obligation under Article 2. The UKSC rejected this, and provided essential guidance for what will constitute an Article 2-compliant inquest or other form of investigation into killings and other suspicious deaths:

These judgments will not affect all inquests. They will affect so-called Middleton inquests where the coroner or jury are asked to determine by what means and in what circumstances the deceased died, in cases such as:

Usually all of those factors featured in most contentious deaths in The Troubles. The families in the queue for inquests hoped that the damages awards sanctioned in Jordan might provide some incentive for the Westminster Government (in the absence of a Government in Stormont) to answer judicial pleas for funding to hear the Legacy Cases (In re Hughes (2018)). The searing stories of civilians bereaved or injured by the Troubles, with their unanswered questions, are currently featured on the BBC TV programme Survivors.

Whether it is legally feasible to create an amendment to the HRA which would prevent those inquests from being held, whilst allowing the UK to remain compliant with the ECHR, is difficult to assess now in the absence of any detail. But it might be predicted that it would be extremely difficult for the UK Government to rely upon delay as a justification for a general bar on inquests investigating The Troubles before 2000, when so much of that delay, on the evidence of independent inquiries, has been attributable to failures and decisions by the Government itself.

Moreover, the overriding principle of the interests of justice in all court proceedings must not be forgotten. The coroner in the second Article 2  inquest into Peace Jordan’s shooting returned an inconclusive verdict on whether the use of lethal force by the state’s agents was justifiable, due to deterioration over time of the evidence concerning the incident. The interests of the other state actors involved in a death, will be as much protected in an inquest as the family’s (some would say more, due to the limits to legal aid for them). In criminal cases the defendant is always entitled to invoke the inherent jurisdiction of the courts to stay the prosecution as an abuse of process, for example if the evidence is too stale or patchy to enable a jury to return a proper verdict. In short, the current systems of justice should serve to protect the interests of those investigated without a retroactive conferment of unaccountability of state actors for alleged human rights breaches.

Laura Hoyano is a barrister at Red Lion Chambers, practising human rights, public inquiries, and inquest law. She is also Senior Research Fellow at Wadham College Oxford and a member of the Faculty of Law, University of Oxford. Her commentary on the Finucane and Jordan judgments (written with Nicolas Bamforth) will be published in the Law Quarterly Review in January 2020. 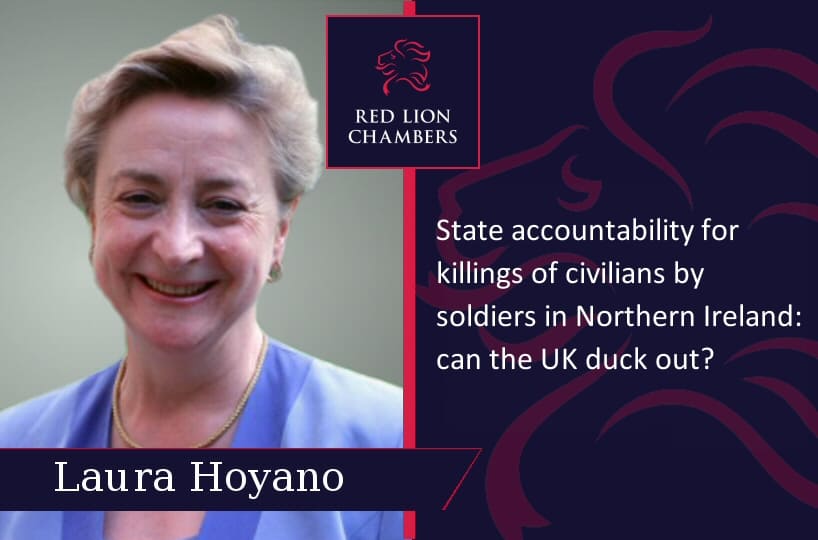