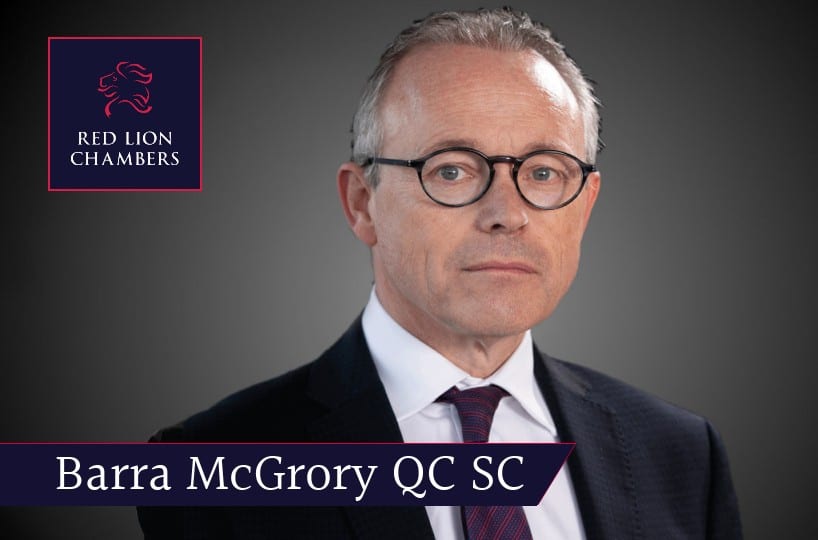 RLC are delighted to welcome Barra McGrory QC SC to Chambers as an Associate Tenant.

Based in Ireland, Barra McGrory QC SC brings to Chambers vast and unrivalled experience in the areas of criminal law and public inquiry work.

Barra’s early experience as a defence solicitor specialising in terrorism work in Northern Ireland and his six years as DPP of Northern Ireland gives him a unique insight into every aspect of the criminal justice process. Indeed, his criminal practice over the years has been varied and extensive balancing prosecution and defence work. He has appeared in the UK Supreme Court, the Supreme Court of Ireland, European Court of Human Rights (SAS Gibraltar case) and the Commercial Division of the High Court. Over the last 2 years he has been an Associate Tenant at Doughty Street Chambers where he defended in a major SOCPA trial, a murder, and a recent counter terrorist case involving a former head of neo-Nazi organisation “National Action”.

Aside from Criminal law, Barra’s other significant area of expertise is in public inquiry and inquest work. He played a very significant advocacy role in the Bloody Sunday Inquiry, Robert Hamill Inquiry and Rosemary Nelson Inquiry and is currently instructed in three of the outstanding legacy inquests being dealt with by the Legacy Inquest Unit presided over by Mr Justice Humphries. He is on the Legacy Inquest Senior Counsel Panel to advise coroner’s when appropriate. During his time as DPP for Northern Ireland he went through the process of being developed vetted (the highest level of vetting) and this status has recently been renewed by the Legacy Inquest Unit.

“I am delighted to join Red Lion Chambers, a set that has a formidable reputation for complex criminal work, an established track record in prosecution as well as defence and talent and strength at all levels.”

“Barry McGrory QC SC has been at the forefront of the criminal justice system for over 35 years and brings with him vast experience in criminal and human rights law. One of Northern Ireland’s most prominent and respected lawyers, we are honoured that he is joining Red Lion Chambers and on behalf of all of Chambers we are delighted to give him a warm welcome.”