The 5th February 2021 saw publication of the long-awaited judgement in the case between KBR Inc. and the SFO, in which the Supreme Court unanimously ruled that the SFO’s compulsory production orders do not have extraterritorial effect.

The Criminal Justice Act 1987 s2(3) gives the Director of the SFO power to require a person or entity under investigation to produce relevant documents. A failure to do so within the time specified in the notice is a criminal offence, unless the recipient can show a reasonable excuse. In the instant case, KBR Inc. challenged whether the SFO had the power to require them, a foreign company, neither based nor carrying on business in the UK, to produce documents held in another jurisdiction. The presumption in our domestic law is that legislation is generally not intended to have extra-territorial effect. The SFO’s failed attempt to rebut that presumption makes for an interesting appeal judgement that examines issues of statutory interpretation, international cooperation and the need for checks and balances around the exercise of compulsory powers such as under s2(3).

The case arose out of the SFO’s ongoing investigation into bribery at Unaoil, specifically, alleged corrupt payments made to them by UK company KBR Ltd, which were processed and approved by their American parent company, KBR Inc. KBR Ltd handed over some documents in response to an earlier s2(3) notice, but withheld others, on the basis they were overseas and under the control of KBR Inc., which did not carry on business in the UK. The SFO requested the attendance of a senior KBR Inc. executive at an in-person meeting in London, ostensibly to update them on progress of the investigation, whereupon a s2(3) notice was served on them, purporting to thus require further production of documents.

In September 2018 the Divisional court refused KBR Inc.’s application for judicial review of the validity of the SFO’s notice, ruling that s2(3) did extend to foreign companies in respect of documents held overseas where there was a ‘sufficient connection’ between the company and the UK. On the facts, KBR Inc. was deemed to have this sufficient connection, thus the document production could be compelled. The Divisional Court certified two points of law of general public importance, for which permission to appeal was granted by the Supreme Court in April 2019, only the first of which was pursued by the SFO:

(1) Does section 2(3) of the 1987 Act permit the Director of the SFO to require a person to produce information held outside England and Wales?

(2) If so, does the Director of the SFO have power to do so by reference to the “sufficient connection test”?

The Supreme Court in dealing firstly with this issue, found ample support for the presumption in UK domestic law that legislation is generally not intended to have extra-territorial effect: in core texts on statutory interpretation; the case of Al-Skeini[1] in its discussion on the scope of application of the Human Rights Act 1998; and the requirements of international law not to infringe another state’s sovereignty. Particular emphasis was placed on the importance of the principle of comity; that States will interpret their laws in this way ‘out of mutual respect and, no doubt, the expectation of reciprocal advantage’. The parties to the appeal therefore focussed their arguments on whether there was support for a rebuttal of this general presumption, either in the language of s2(3) itself, there was not, or in the wider scheme, context and subject matter of the legislation, with Lord Lloyd-Jones being ‘unable to find any clear indication, either for or against.’

The SFO found favour in the Divisional Court by arguing that this uncertainty could be settled by taking a purposive interpretation of the Act: persuading the court to conclude that there is “extremely strong public interest” in the UK being able to combat international fraud, as well as meet its international obligations under the OECD Convention[2]. The divisional court found that some extra-territorial ambit must have been anticipated for the SFO’s powers when the CJA 1987 was drafted, to give it jurisdiction over documents held overseas by UK companies –it being “scarcely credible that a UK company could resist an otherwise lawful s.2(3) notice on the ground that the documents in question were held on a server out of the jurisdiction.” Having reached this conclusion, the court then used it as a stepping stone to interpret s2 as having the same power over a foreign company. The Supreme Court disagreed with this logic; the power to simply require a UK company to bring its own documents back into the jurisdiction was a flimsy sort of extra-territoriality on which to assert that the same could be required of a foreign company with neither any presence, nor which carried on any business in the UK.

This obiter comment that s2 can be used by the SFO to compel UK companies to produce documents held overseas is perhaps the hidden win in this case. Whilst the SFO’s remit of targeting criminality where ‘the complexity and nature of the suspected offence warrants the application of the SFO’s specialist skills, powers and capabilities to investigate and prosecute’ frequently results in their cases having a international dimension, it is worth bearing in mind that the SFO’s primary target is UK corporations.

The Divisional court’s interpretation that Parliament intended for s2(3) to have effect on foreign companies’ documents overseas rather begged the question why, if the SFO had always possessed such powers, they had instead to date relied on Mutual Legal Assistance to obtain them, opting to tolerate the notoriously unhurried pace with which such requests are met, rather than simply using their compulsory powers under s2(3)? The SFO’s repetition of their arguments for a purposive interpretation prompted KBR Inc. to present the Supreme Court with the legislative history of the 1987 Act, Lord Lloyd Jones’ detailed analysis concluding that it was “inherently improbable that Parliament should have refined [international systems of mutual legal assistance] as it did, while intending to leave in place a parallel system for obtaining evidence from abroad which could operate on the unilateral demand of the SFO, without any recourse to the courts or authorities of the State where the evidence was located and without the protection of any of the safeguards put in place under the scheme of mutual legal assistance.”

In the Divisional Court, KBR Inc. had also sought to challenge the validity of the notice by relying on the decision in SOCA v Perry[3]concerning disclosure orders, in which Lord Phillips held that SOCA (now the NCA) did not have the power under POCA to impose freezing orders over property, or make disclosure orders against Mr Perry, whilst both were situated overseas in Israel - stating that to do so would be a “particularly startling breach of international law”. Whilst giving some consideration to the application of a ‘sufficient connection’ test in determining whether the power existed, the court in Perry concluded that this went beyond the boundaries of legitimate statutory construction, since nothing in the statutory language of POCA displaced the presumption against extraterritoriality in English law.

The Divisional Court in KBR Inc. v SFO however took a less restrained approach, and did move on to apply a ‘sufficient connection’ test, distinguishing Perry on the basis that it had concerned a notice served on an individual with absolutely no connection with the UK, save for the location of his assets. KBR Inc. on the other hand were deemed to have a ‘sufficient connection’ with the UK by virtue of their approval of KBR Ltd’s payments. The Divisional Court defended itself against the accusation that they were engaging in the self-same ‘judicial legislation’ which the Supreme Court in Perry had eschewed, by stating that “the (s2) construction issue necessarily involves the extent of extraterritorial jurisdiction”. This was a rather logically unsatisfying statement, assuming as it does that which must be proved, namely that there was any extraterritoriality at all.

The Supreme court in reconsidering this issue on the appeal found a “striking similarity between Perry and the present case…the similarity of the provisions and the issues under consideration is such that the reasoning of Perry is strongly supportive of the view that section 2(3) of the 1987 Act was not intended to confer a power to require disclosure by a foreign person abroad.” Since the appropriateness of implying a sufficient connection test into section 2(3) was not pursued by the SFO on appeal, the Supreme Court did not need to deal with this point, but nonetheless dismissed it as being inconsistent with the intention of Parliament and requiring an illegitimate re-writing of the statute

The SFO also brought the court’s attention to case law interpreting sections of the Insolvency Act 1986 and the Finance Act 2008 as having extra-territorial effect, but Lord Lloyd-Jones placed little weight there, stating that these decisions were “concerned with an entirely different statutory scheme from that in the present case”, that such differences could not ‘be glossed over by reference to public policy interests’ and these cases were therefore, relevant only by way of analogy. He found that any comparison fell down when the safeguards built into the analogous statutory schemes were considered: the wide ambit of the Insolvency Act for example was countered by the requirement for leave of the court before service on defendants abroad, and the discretion of a court to make no order at all. In s2(3) CJA 1987, there are no such safeguards, since the power is conferred not on a court but on the SFO, “there is no scope here for limiting the operation of a broad interpretation or safeguarding against exorbitant claims of jurisdiction by the exercise of judicial discretion.”

This decision is widely thought to be a disappointment for the SFO, whose success in the Divisional Court was seen as an acknowledgement of the international nature of large-scale fraud, where investigators increasingly target documents stored on servers or cloud-storage platforms outside the SFO’s jurisdiction. In reality however, this judgement merely marks a return to the status quo, and paves the way for perhaps more power over UK companies’ documents overseas. The judgement is however a victory for scrupulous statutory interpretation and restores the primacy of international agreements as the foundation for obtaining foreign overseas material, the Divisional Court’s judgement having seemingly made redundant the decades of careful construction and international negotiations instigated by the Roskill Report. Lastly, the significance of this judgment is likely to diminish once the bilateral agreements underpinning the new Overseas Production Orders are ratified, hopefully making the gathering of evidence from overseas easier and faster.

If readers are interested in learning more about OPOs, Faye Rolfe and Shane Collery QC gave a seminar on these in October 2020, a recording of which can be found here.

Faye Rolfe is a member of Red Lion Chambers, located in both London and Essex. Alongside her court practice, Faye is currently working as Review Counsel at the SFO on an investigation into international bribery and corruption, as well as assisting Hickman & Rose Solicitors with disclosure in the run up to the trial of Serco managers by the SFO.

[2] The Organisation for Economic Co-operation and Development Convention on Combating Bribery of Foreign Public Officials in International Business Transactions, 1997 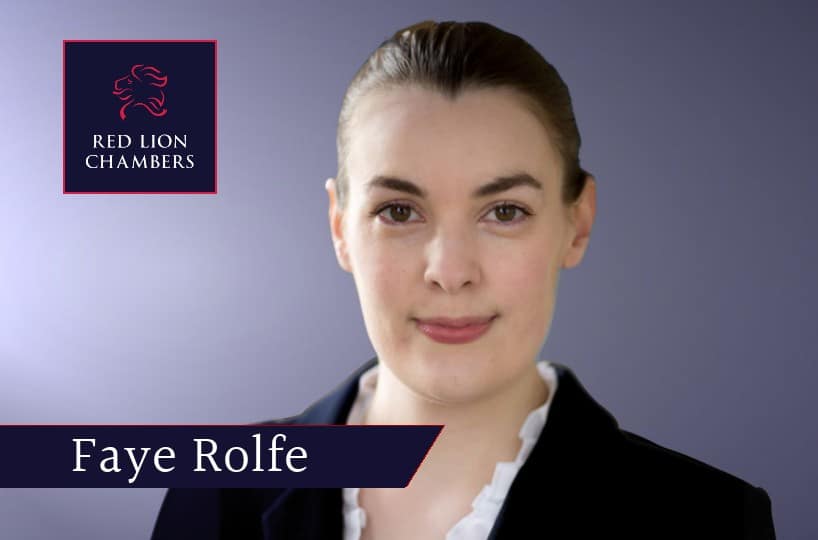