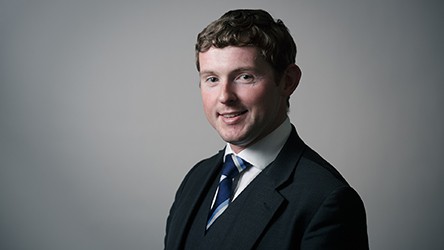 Joe maintains a busy, sound practice prosecuting and defending across the full range of criminal offences.  He brings focused preparation, robust advocacy, a down to earth approach and sensitive interpersonal skills to his cases.  Based in Red Lion Chambers’ Chelmsford Annexe, Joe regularly appears across East Anglia, but also accepts instructions both in London and nationally.

In April 2015, he moved to independent practice at Red Lion Chambers after a successful 2½ years with the Crown Prosecution Service where he gained considerable experience and skills that continue to serve him today.  Joe’s practice is predominantly in the Crown Court.  He also maintains a Magistrates’ and Youth Court practice, delivering effective advocacy in those fast-paced jurisdictions.

Joe is authorised to accept instructions under the Direct Access scheme.

Joe’s breadth of experience has provided him with a solid foundation on which he continues to build a busy prosecution and defence practice.  He is regularly instructed in contested trials and hearings across the full range of offences.  He is also able to deal with interlocutory and ancillary hearings in cases that would otherwise be much above his call including serious sexual offences, substantial conspiracies, serious violent offences and homicide.

Joe regularly handles cases involving a broad spectrum of fraud types including a particular specialism in benefit frauds of varying value and length.  He is very familiar with the mechanics and subtleties involved in these offences.

Joe accepts instructions for both the prosecution and defence in a wide range of confiscation proceedings.  He is fully aware of the advantages which can be achieved through negotiation and avoiding a full contested hearing in this growing area.

Joe is regularly instructed by the prosecution and defence in cases of violence and has particular experience in cases of domestic violence.  He is familiar with the sensitivities and vulnerabilities that are typical of these cases.  His experience allows him to approach such cases with confidence and to advance apparently unattractive arguments sensitively but firmly in both cross-examination and submissions.

Joe has prosecuted and defended service personnel in the civilian courts on a number of occasions.  He has a practical understanding of the often sensitive background to these offences and is aware of the consequences a conviction will have on a defendant’s continued service.  Joe accepts instructions in the civilian and military courts, both in this country and abroad.

Joe has dealt with a wide range of road traffic offences and is experienced in marshalling the combination of technical, expert, and factual evidence that can arise in road traffic cases.  He understands how to conduct a case in line with the principles that underpin road traffic legislation in the summary jurisdiction, an often overlooked area of practice.  He well understands that avoiding or minimising a disqualification can be the most important result for a client.  He always strives to achieve that objective and is well placed to make focused arguments and tactical decisions to achieve that aim.

Joe has first-hand experience of the work and demands of a heavily regulated industry, having worked as the Senior Instructor at an outdoor centre in Essex before joining the Bar.  He accepts instructions on behalf of both prosecuting authorities and defendants.