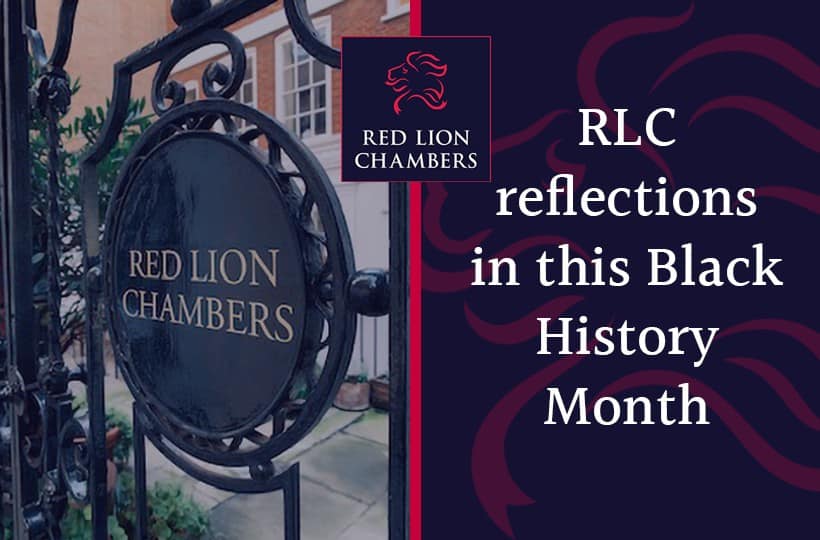 RLC members comment on the contribution black people have made to society, the law and the history of the UK and the journey taken to do so.

Following a successful career at the Bar, in October 2004, Dame Linda Dobbs became the first non-white high court judge in the UK. At the Bar she was a member of, and chaired, a number of committees, including the Race Relations, Equal Opportunities, International, Professional Conduct and Professional Standard Committees. In 2003 she became the Chairman of the Criminal Bar Association where she set up its first Equality and Diversity sub-committee. Whilst on the High Court Bench she was the Senior Liaison Judge for Diversity, Chair of the Magisterial Committee of the Judicial Studies Board and Chair of the International Committee of the Judicial College and a Fawcett Commissioner.

“Black History Month is a time for reflection; a time to celebrate black people’s contribution to society. It is a time to showcase new talent and new role models and to identify and encourage potential by mentoring and other support.”

Following on from the death of George Floyd on 25 May 2020, RLC came together with East London Business Alliance [ ELBA] to lead a campaign led by a group of senior and influential Black and BAME professionals and business organisations. The campaign headed up by Michelle Nelson QC was named Shift25 with the objective to create fundamental change by 2025 for a ‘better tomorrow’: [A Campaign for a Better Tomorrow] . Writing a blog post for Shift25 called ‘A Moment of Change’, Marilyn Vitte and Dan Robinson, members of the Equality and Diversity Committee, examined the global reaction to the murder of George Floyd, issues faced within the UK criminal justice system, Black Lives Matter protests and the Policing Bill. They reflected:

“..we are acutely aware of the massive imbalance in the system on this side of the Atlantic, with disproportionate numbers of Black defendants within the criminal justice system and a concerning rise of Black deaths in custody.”

BLM Committee member Alistair Fell reviewed barrister Alexandra Wilson’s book “In Black and White: A young Barrister’s Story of Race and Class in a Broken Justice System” explored the barrister’s personal account of her journey to the Bar and the challenges she experienced along the way as a mixed-race woman. Alistair commented that the book looked at “issues of racism, sexism and class which continue to blight the legal system”. Read Book Review here: [Law Gazette]

“Black History Month provides an opportunity for all communities to focus on the contribution of the Black community to the history of the UK and the wider world. It should also provide a platform for a wider debate about the need for a far more inclusive education curriculum. My hope would be that it promotes a better understanding of the Black community and that it provides the historical context for why Black people are one of the most disadvantaged groups nationally and globally.”