Red Lion Chambers are pleased to have maintained Tier 1 ranking in the category of Crime in this year’s Legal 500.

Reviewed as ‘a leader in its field’ and home to a team of ‘talented counsel', Chambers were ranked across 12 practice areas including: Crime, Business and Regulatory Crime including Global Investigations, Financial Services Regulation; Fraud (Civil); Fraud (Crime); Health and Safety; International Crime and Extradition, POCA and Asset Forfeiture, Professional disciplinary and regulatory law, Tax, Environment and Sport.

The 2022 guide made special mention of co-Head of Chambers, Gillian Jones QC who represented a defendant in a case concerning a seemingly random murder of a woman during the March 2020 lockdown, as well as a further charge of attempted murder the day after the attack. Leo Seelig was noted in his instructions by the CPS Counter Terrorism Division to prosecute a teenager who was convicted of being a member of proscribed neo-Nazi group Feuerkrieg Division and distributing terrorist material. New Silks, Allison Clare QC, Cameron Brown QC and Hannah Willcocks QC were profiled as well as new member Aneurin Brewer.

The Clerks Team were given a special mention: "Mark Bennett is an outstanding practice manager ably assisted by his deputy, Nick Parkinson and a well-run clerking team" with Red Lion’s clerks known as "being friendly, efficient and approachable".

“It has been an exceptionally tough year at the Bar following the pandemic and court closures, so to be recognised yet again as Tier 1 for Crime gives us great pleasure in Chambers’ achievement. We are also proud to see the individual rankings of our members as well as the glowing reviews of our hard-working Clerks Room." 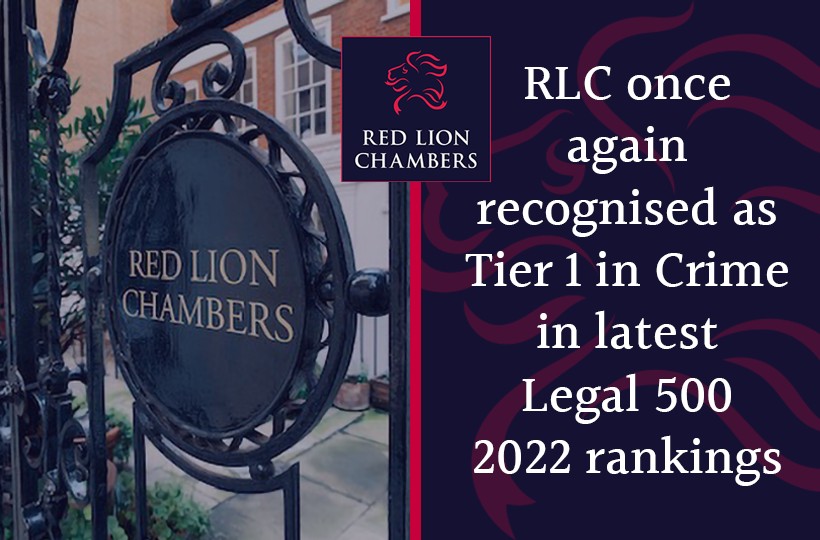