The 19th Pro Bono Week begins today looking at the theme of “Pro bono: Through the pandemic and beyond" and Chambers has been at the forefront of volunteering services to charities, community groups, prospective law students and those who are most vulnerable and in need of legal help.

The year has seen unprecedented challenges, for both the voluntary and legal sectors and pro bono legal help has never been more important.

Earlier this year RLC members undertook the ‘10,000 steps for Justice’ and the ‘Legal Walk x10 challenge’ in June and October to support the work of law centres and legal advice agencies in London and the South East. Members walked, ran, played tennis and swam to raise much needed funds for London Legal Support Trust, Free Representation Unit and Advocate.

RLC continues its partnership with East London Business Alliance [ELBA] mentoring and supporting people and communities in East London. Following the Black Lives Matter movement, a new campaign called [SHIFT25] was initiated to address the prejudice and injustices Black communities face and to work towards change with that ‘shift’ taking place by 2025.

Historically, many members have always played a pivotal role in working with charities and community groups. In a recent survey, findings showed that over half of RLC members (51%) offer support to charitable and legal charity organisations with 34% having worked with organisations for over 5 years maintaining long standing relationships.

"With severe legal aid cuts and now the effects of Covid19, we recognise that poverty and inequality is on the rise but access to justice should not only be for all but also accessible to all members of society. We are proud to support Pro Bono Week and will continue to offer our services to those who are vulnerable and most in need.”

For a full list of Pro Bono services and case work that a selection of our members have undertaken in 2020 please see list below.

Co-Head of Chambers Gillian Jones QC
Gillian was instructed by the Centre for Women’s Justice in Jemma Beale’s appeal against conviction. As a member of the Legal Panel for the Centre for Women’s Justice she has drafted responses for cases and has led on training in ‘Sexual Offences - Law and Procedure’ for the organisation. She takes part in the ELBA Mentoring scheme as well as being a Board Member on the Development Committee for Clean Break Theatre which uses theatre to keep the conversation about women in prison on the cultural radar.

Professor Laura Hoyano
Laura has been working with the Youth Justice Legal Centre/Just for Kids Law on their new YHLJ Intermediary Guide - Use of intermediaries for child defendants for child defendants, appearing on an accompanying webinar. She has also provided pro bono advice on developing the strategy in the successful case of TI v Bromley Youth Court on the use of intermediaries.

Michelle Nelson QC
Michelle is a trustee of the Prison Reform Trust (PRT) assisting to shape its strategic vision. She supports the PRT to raise awareness of the conditions in prisons, the experience of prisoners, to challenge sentencing practice and address the inequality in numbers and experiences of prisoners in relation to gender, ethnicity and youth. Michelle is also the Commissioner on the 2019/20 Inquiry into the Criminal Cases Review Commission and on the 2020 Independent Commission into the Experience of Victims and Long-Term Prisoners, both working to improve the criminal justice system. She also sits as the Chair of the Ekaya Housing Association, which holds property across 8 south London boroughs and provides housing and accommodation support particularly for Black and minority ethnic women and their families, and as part of that, operates a community nursery. Michelle mentors graduates and undergraduates with ELBA and is a member and founder of SHIFT25.

David Young
For the last 2 years, David Young has been retained as the pro bono lawyer acting for the UK's leading medicinal cannabis campaigner, Ms Carly Barton who was the first person in the UK to receive an NHS medicinal cannabis prescription. David has been working with Carly and the Centre for Medicinal Cannabis and the All Party Parliamentary Group for Drug Policy Reform to try to change legal guidance on the police and prosecution agencies deal with patients who meet the criteria for obtaining lawful cannabis but cannot afford it. David has also been working with 'Social Enterprise UK' by contributing to the video on the 'Buy Social Campaign', along with the actor Michael Sheen and others.

Sailesh Mehta (nominated and shortlisted for the 2020 Advocate Pro Bono Barrister of the Year)
Sailesh secured the acquittal of the main protestor in the HS2 protests and represented the lead protest in the HS2 Civil Injunction case which involved 28 protestors with a trial lasting many days. He also represented the lead protestor in the 3-day Vegan protest trial involving Dolce & Gabbana.

Valerie Charbit
Valerie has been working with Inclusion London - a charity that promotes equality for deaf and disabled people in London. Recent campaigns include restoring the rights of Disabled people whose rights have been taken away by the Coronavirus Act as well as those who have been affected by having their benefits cut. The organisation has also recently released a report looking at disability hate crime in England and how this affects the disabled population.

Nicholas Hall
Nicholas Hall is currently working with Hogan Lovells to overturn the historic sex convictions of a victim of human trafficking who gave evidence at her traffickers' trials, resulting in their convictions. It is being argued that it is erroneous to have the individual 'designated' by the CJS both as a defendant and victim with respect to the same conduct.

Aimee Riese
Has represented chambers at Lincoln's Inn in a Q&A for prospective law students. She has appeared in several pro bono immigration bail hearings instructed by Bail for Immigration Detainees (@BIDdetention) and has been a mentor on the BME Legal scheme (@BME_Legal) volunteering to be a mentor again this year. She is a school governor at the Bridge School, a special school for children with severe learning difficulties and/or autism.

Zoë Chapman
Zoë was selected as a Social Mobility Advocate for the Bar Council. Earlier this year she took part in a careers panel at the JUSTICE conference and in July gave a presentation at the Sutton Trust’s ‘Pathways to Law’ Conference.

Faye Rolfe
Faye has provided careers advice to students at her old secondary school, giving an example of ‘A day in the life’ and dispelling myths about the background required to succeed.

Sam Smart - Probationary Tenant
Sam took to twitter (pre-covid) to offer mock pupillage interviews over Skype running sessions with 10 students, four of whom obtained pupillage later in the year. He has also taken on a mentor from the Young Legal Aid Lawyers association helping her with applications. She was awarded a GDL scholarship from both Lincoln’s Inn and her Bar School. He has also mentored Glenthorne School in the Young Citizen’s Mock Trial competition, running three advocacy training sessions with them: they made it through to the final at the Old Bailey (cancelled due to Covid). 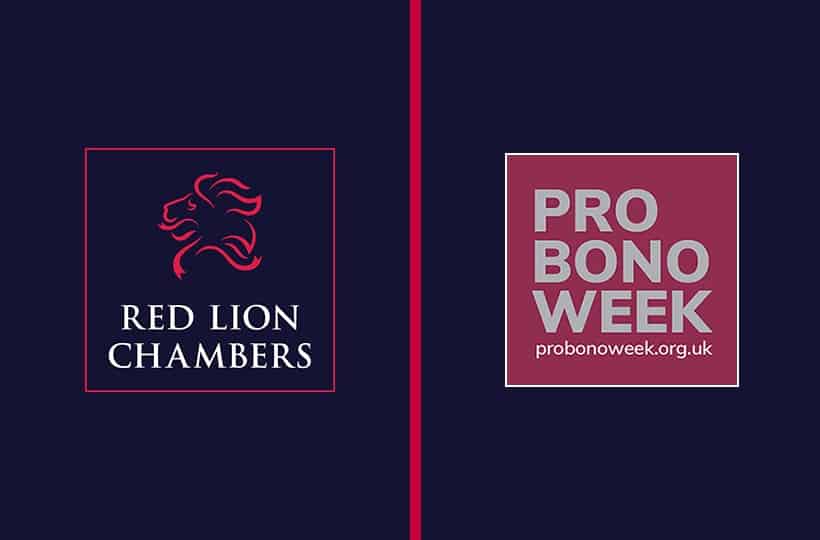