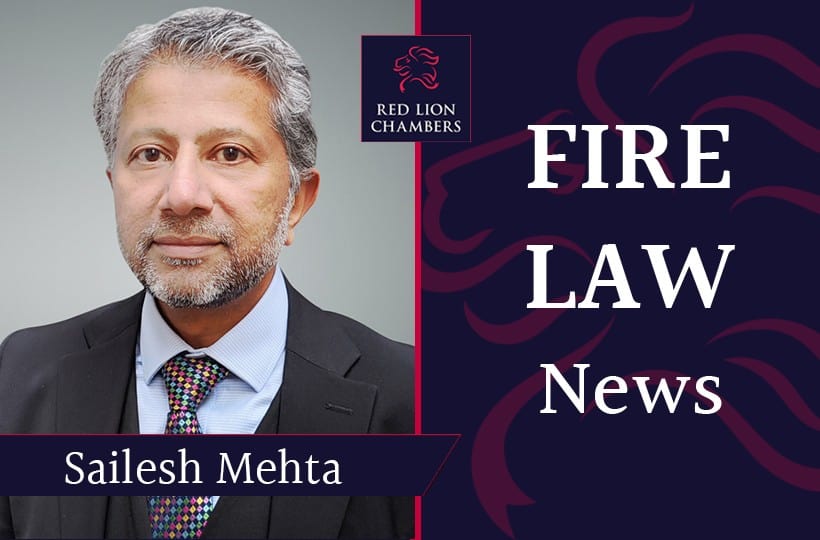 Barrister Sailesh Mehta shares advice for expert witnesses in fire cases, based on his experience and lessons from miscarriages of justice

Witnesses giving evidence can sometimes get things wrong. Expert witnesses occasionally make mistakes. Because judges and juries often put great weight on the evidence of an expert, every error could lead to a miscarriage of justice. The Court of Appeal has had to deal with a worrying number of such cases and the common theme of these is that catastrophic errors could be avoided if greater scrutiny is applied at each stage of the trial process.

Expert witnesses are now an accepted part of criminal and civil trials. Their evidence can be of great assistance to the court in better understanding a factual scenario which is outside the knowledge or experience of most people. The use of expert witnesses and the admissibility of their evidence has developed over the last 250 years, since the concept of allowing an expert to give opinion based evidence on the facts was recognised by Lord Mansfield in the case of Folkes vs Chadd in 1782.

Evidence is now regularly given by experts in criminal trials, in areas including DNA analysis, fingerprints, blood marks, photographic identification, cause of death, nature of firearms, drugs language and so on.

In most fire prosecutions, experts will give evidence about the cause of a fire, the likelihood of death or serious injury as a result of a combination of deficiencies in a building, the nature of cladding on an exterior wall or the suitability of a particular alarm or door. In addition, experts are frequently used in civil trials (particularly those connected with injury, construction disputes and insurance cases), as well as in disciplinary tribunals involving doctors, nurses and dentists. In fire cases for which I have been instructed, I have often used experts dealing with a wide range of topics, including:

Because expertise in fire cases is a relatively new discipline, experts in such cases need to exercise great caution and circumspection before reaching an opinion on any important issue which might be decisive in a case.

As a result of a series of high profile miscarriage of justice cases both here and abroad, the Court of Appeal and the Law Commission have voiced mounting concern about the use of expert evidence in criminal trials. Research has confirmed that juries can give undue weight to expert evidence, particularly if it is in a complex area that is difficult for the jury to follow.

Accordingly, there is an added burden on the court and all parties involved in litigation to ensure the evidence is necessary, admissible and thoroughly tested before trial and in court.

In a 2019 case, Andrew Ager had been hired by the prosecution team in a trial of eight men accused of a £7m carbon credit fraud at Southwark Crown Court. Cross examination revealed that the ‘expert’ did not have any relevant qualifications. The judge stopped the trial, saying: ‘Andrew Ager is not an expert of suitable calibre. He had little or no understanding of the duties of an expert. He had received no training and attended no courses. He has no academic qualifications. His work has never been peer-reviewed.’

Mr Ager has appeared for the prosecution in at least 20 other cases – and the Metropolitan Police is now referring the matter to the National Crime Agency. Fire experts can learn the following lessons from this:

In Dallagher (2002). the defendant was charged and convicted of murder. An earprint on a window at the murder scene where the deceased was asleep proved the defendant’s presence at the scene. West Yorkshire Police sent the earprint to Mr Van Der Lugt, a Dutch policeman. For more than a decade, he had taken a close interest in earprint identification and had come to believe that each person’s earprints were unique.

He had no formal forensic science qualifications and opined that he was ‘absolutely convinced’ that the defendant had left the earprint – a second prosecution expert thought it a ‘remote possibility’ that the print had been left by someone else. DNA evidence taken from the earprint subsequently established that it had not been left by Mr Dallagher at all and he was released after eight years in prison. Fire safety experts can learn the following lessons from this case:

If the court and lawyers had asked these questions, it is likely that the ‘expert’ evidence would not have been admissible, or would have been the subject of serious challenge.

British solicitor Sally Clark was found guilty of smothering her 11 week old child in 1996 and of shaking her eight week old child to death two years later. There were no injuries ordinarily found in such cases. A paediatrician with expertise on sudden infant death syndrome said there was a one in 73 million chance of two such deaths in the same family occurring naturally.

He had no expertise in statistics and had simply squared the chance of one sudden death – one in 73,000 – without taking genetic factors into account. The Court of Appeal, on acquitting her, said this figure grossly misrepresented the true position. It transpired that the prosecution had failed to disclose medical details which may have led to a very different conclusion on cause of death.

The Royal Statistical Society wrote to the Lord Chancellor, saying there was ‘no statistical basis’ for the figure. Experts now believe the risk could be anywhere between one in 100 and one in 8,500. She was released, but never recovered and died three years later.

Subsequent research carried out as a result of another similar miscarriage of justice case (Canning [2004]) found that ‘the occurrence of a second unexpected infant death within
a family is… usually from natural causes’. Fire experts can learn the following lessons:

Until the judgment of the Court of Appeal in Harris and others (2005), the prosecution had been allowed to rely on a hypothesis that a non accidental head injury to a young child could confidently be inferred from nothing more than the presence of a particular triad of intracranial injuries. This untested hypothesis was used in numerous cases, including murder. The court criticised the use of such untested hypotheses to secure convictions.

The lesson fire experts can learn from this case is that any hypotheses should be clearly flagged and critically scrutinised, and must be underpinned by empirical research to justify the opinion evidence founded on them.

Judith Ward was wrongly convicted of the 1972 M62 coach bombing in which 12 soldiers and members of their families died. At the time, it was the worst Irish Republican Army outrage on the British mainland. She served 17 years for crimes she did not commit and lawyers at her appeal said there had been ‘significant and substantial’ non disclosure of information to
the defence by three government scientific experts, whose reports were heavily biased against the defendant.

Fire experts can learn the following lessons from the Ward case:

Common themes, which can be seen across all of the cases referred to so far, are as follows:

These three factors, or any combination of them, will result in future miscarriage of justice cases. It is estimated that in the USA, one in 50 who have been convicted largely on the basis of expert evidence may well be innocent.

Sante Tribble was convicted of murder and served 26 years, in large part because an FBI analyst matched his hair in microscopic characteristics to 13 hairs found at the murder scene – ‘one chance in 10 million that it could be someone else’s hair’. DNA analysis exonerated him once it was carried out on the hair and some turned out to be dog hair
– Sante Tribble’s conclusion was that the dog committed the crime!

The Innocence Project looked at all hair expert evidence from the 1970s to 1999 and found that of the 268 cases of conviction, 257 (96%) had errors in analysis. Nine of those defendants had already been executed. I have cross examined many so called experts of doubtful expertise, including:

This does not meet the scientific standards for foundational validity. One such ‘expert’ in the USA, Dr West, found a bite mark on a slice of baloney ham in a sandwich and gave evidence that it matched the defendant’s teeth. An autopsy report showed the baloney had been eaten by the victim and was
consistent with the amount eaten from the sandwich – Dr West no longer believes in bite mark analysis.

If you think this is an entirely reliable discipline, think again. In the USA, a false positive can crop up as often as 1 in 306 cases. After the 2004 Madrid train bombings, a fingerprint was found on the detonators which matched that of an American – Brandon Mayfield – who was immediately arrested in the USA.

He had never been to Spain in his life, but three separate experts confirmed his prints were on a bag of detonators. It transpired that the print also matched the print of another man who was in Spain at the time. This was because the analysis is carried out on parts of a fingerprint, not on the whole – and parts can be so similar that they appear to show a match, when the whole print is in fact not a match.

My own experience of fire experts is rather different to these examples. They have all been reflective of their duty to the court, are painfully aware of the limits of their expertise and are meticulous in alerting the court to the range of factors in, and rationale for the opposing view. Long may it continue

This article first appeared in the Fire & Risk Management Journal, April 2021. Sailesh Mehta is a barrister at Red Lion Chambers.