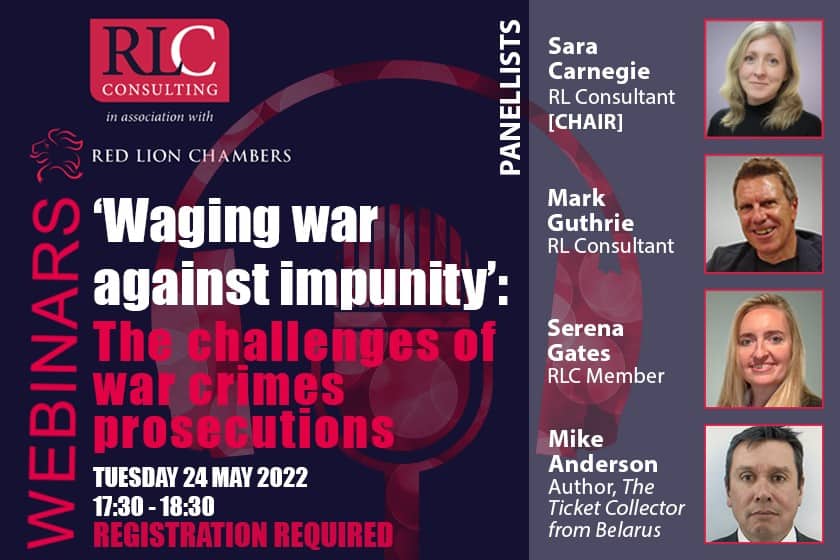 'Waging war against impunity': the challenges of war crimes prosecutions

Those who wage war must be held accountable for their actions. Against the backdrop of the war in Ukraine, this webinar will examine past domestic and international experiences of prosecuting war crimes, the practical issues involved and the obstacles to be overcome in the battle against impunity.

This webinar will look at the following:

Mark Guthrie has served as a Senior Human Rights Officer and Rule of Law Legal Adviser in the OSCE Mission to Bosnia Herzegovina. In these capacities he has analysed and advised on the domestic prosecution of war crimes arising out the conflict in Bosnia Herzegovina.

Serena was appointed as a Treasury Counsel Monitoree in September 2021. Her criminal practice focuses on homicide, terrorism, organised crime and sexual offences.

Serena is a member of the Justice Rapid Response roster of experts and in that capacity has advised Ugandan prosecutors on the prosecution of historic war crimes before a specialist domestic tribunal. She has deployed as an investigator in relation to allegations of genocide against the Rohingya and has also conducted investigations whilst working for the United Nations Syrian Commission of Inquiry. She has also worked in Afghanistan and Nigeria building capacity in counter terrorism prosecutions.

Serena is also a Senior Civilian Expert for the UK Stabilisation Unit and a member of the International Advisory Committee for Legal Action Worldwide (LAW).

Mike studied Modern History at Sheffield University 1982-1985. Following that he went into banking in The City but from 1988 until now has worked at Coutts in London building a successful career in managing portfolios of HNW and UHNW clients. He spent a significant part of his career focused on the legal sector although after 20 years he redirected his energies to the fund manager industry and most recently is based in the Bank’s Sports, Media and Entertainment division where he spends a lot of time on business development and on building an Art proposition for the Bank.

Since 2008 Mike has researched and co-written a non-fiction book about the only successful prosecution of a WW2 Nazi at the Old Bailey in 1999. This book, published in January 22 and a best-seller revealed what happened in a small town in what was then in Poland but is now in Belarus under Nazi occupation. It revealed a personal story relating to the prosecuted individual and the only Jewish witness in the trial who had been childhood friends.