Red Lion Consulting: Foreign Investment and the Rule of Law 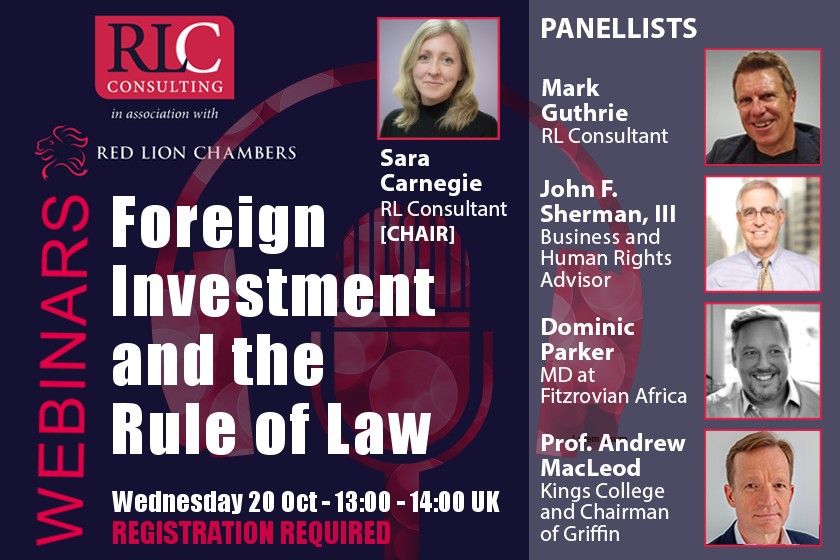 Red Lion Consulting: Foreign Investment and the Rule of Law

This webinar will look at the following:

Mark Guthrie has served in senior rule of law and human rights roles for the Commonwealth and OSCE. He has international legal and governance expertise with connections across judiciaries, governments, NGOs, and inter-governmental organisations. He has an in-depth understanding of the judicial and political systems across the OSCE and Commonwealth regions.

Since 2011, John has been General Counsel and Senior Advisor to Shift, an independent non-profit that is the leading global centre of expertise on the UN Guiding Principles. John has worked with global fortune 500 companies, their legal departments, major international law firms and bar associations, on aligning their policies, processes and practices with the Guiding Principles, and is an internationally recognized thought leader on this subject.

Since 2011, John has also been a Senior Program Fellow at the Corporate Responsibility Initiative at Harvard Kennedy School, and an Executive Fellow at the Hoffman Center for Business Ethics at Bentley University.

John will be speaking here today in his personal capacity only.

Dominic Parker of Fitzrovian Africa will discuss the importance of good governance in drawing in foreign investment, and how this should be perceived as a benefit rather than a hurdle in doing business.

Professor Andrew MacLeod, Kings College London and Chairman of Griffin Law will discuss the Rule of Law and the critical foundational role it plays for post conflict development.

Professor MacLeod is an accomplished organisational leader in the for profit and not for profit sectors. He simplifies complexity, institutes change management, constructs diverse partnerships, and builds high performing, cross-cultural teams.

He has run major natural disaster operations (for the UN), led membership organisations (Committee for Melbourne), been critical in start-up to growth in sustainable investing fintech (Cornerstone Capital, Sendry), led award-winning practices (Griffin Law) and critical environment advice (Burnham Global and Risk Advisory Group). He is a Professor at Kings College London and a Council Member at Keele University. A leading communicator, MacLeod is effective on major TV networks globally, including BBC World and CNN. He is a master public speaker.