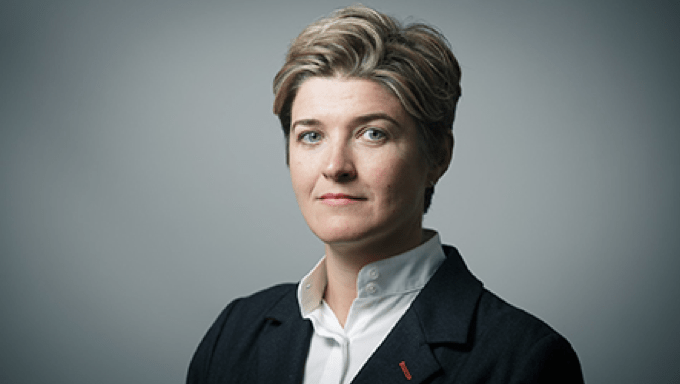 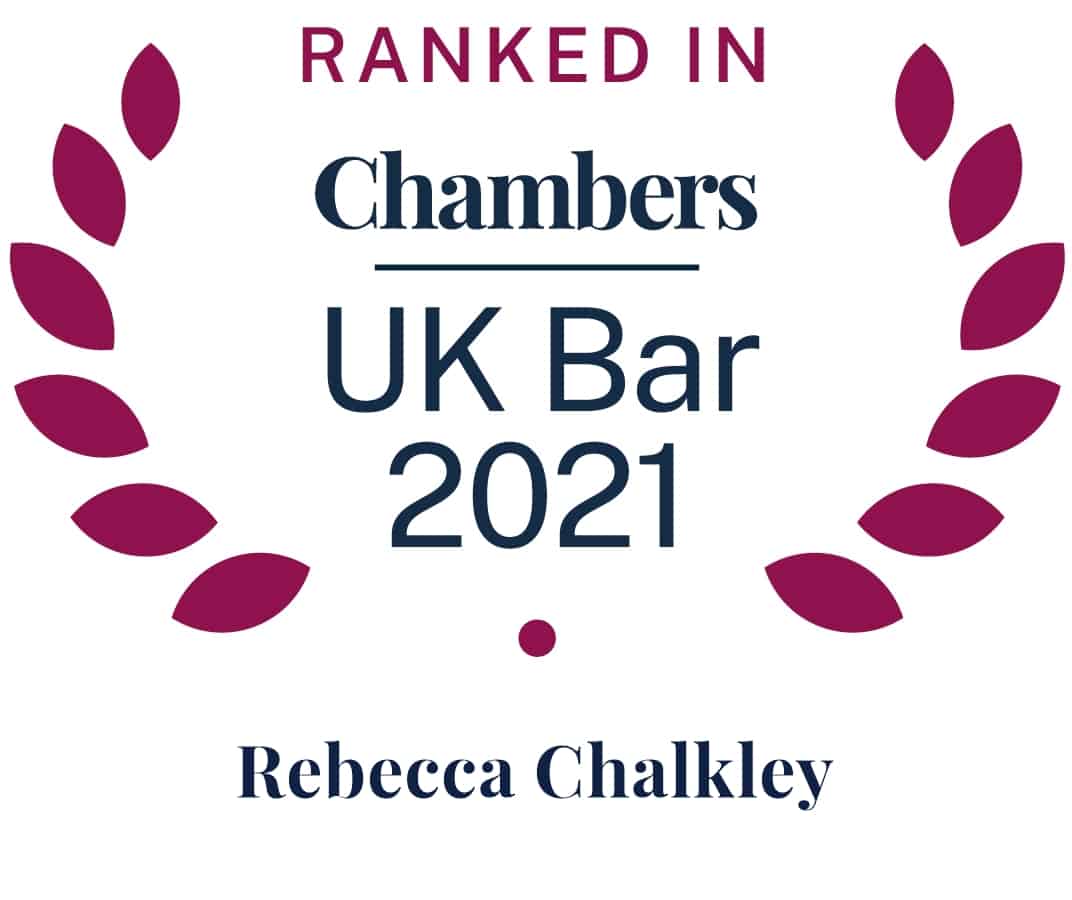 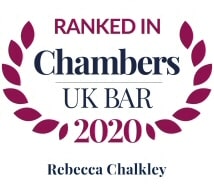 "She is an outstanding advocate - very nice and very bright. She's incredibly knowledgeable."

"A pleasure to work with, always available and approachable."

"Fearless in court, and unafraid of making difficult decisions."

" She's a good advocate, who is hot on the law and really efficient."

"Incredibly imaginative and creative in her approach, and also completely fearless."

Rebecca specialises in all areas of financial crime and commercial wrong-doing.

Her areas of expertise include Insider Dealing, Bribery & Corruption (international and domestic), legal professional privilege, money laundering and Tax Fraud (direct and indirect), fraudulent trading, financial vehicles and the full spectrum of frauds. She is regularly instructed in matters of complexity and sensitivity, and often with an international dimension.

She has been instructed in two cases which resulted in Deferred Prosecutions Agreements (DPA). Including the largest to date.

She is Standing Counsel to the Department for Business & the Insolvency Service and consequently advices the department on the most complicated issues of policy and their prosecutions. She has a vast experience of Bankruptcy and Liquidation and prosecutions under the Insolvency Act and Directorship Offences.

She has been instructed in some of the largest Private Prosecutions that have appeared in the UK courts. She has acted in these for both individuals and corporates.

She has considerable expertise in all matters connected to disclosure and Legal Professional Privilege.

She is frequently instructed in regulatory and quasi-criminal matters on cases involving breaches of professional regulations and on behalf of regulatory bodies. This includes the Health & Safety Executive, The Environment Agency, The Financial Conduct Authority and the General Medical Council.

She is consistently instructed in extradition cases. This includes cases involving the USA, the Russian Federation and Bermuda.

She is instructed by various government departments in cases before the Special Immigration Appeals Commission (SIAC).
She was instructed by the Government, in the “Kamoka” litigation, concerning allegations of rendition and ill treatment sustained in Libya, brought against the British Government.

She has experience in cases where consideration has been given as to the appropriateness of resolution by way of a deferred prosecution agreement (DPA). She was instructed by the SFO in the prosecution of Rolls Royce PLC which resulted in the largest DPA in UK legal history.

She has often worked with accountants and computer experts to reconstruct and understand the commercial trading history of companies and to identify and demonstrate concealed fraudulent transactions and activities. She understands complex bank movements and off-shore transactions, trusts and other financial vehicles. She is extremely familiar with analysing and dissecting business accounting records and auditing material and in presenting such evidence to a jury.

Rebecca has extensive experience of the investigation and prosecution of offences of bribery and corruption both of individuals and corporate entities.

Rebecca is Standing Counsel to the Department for Business & the Insolvency Service and consequently advices the department on the most complicated issues of policy and advises on and acts for the Department in their most serious and high profile prosecutions and investigations. She has a vast experience of Bankruptcy and Liquidation, offences under the Insolvency Act and Directorship Offences.

The majority of the cases that Rebecca has prosecuted have required consideration and achievement of confiscation and parallel restraint proceedings.

Rebecca has experience of the seizure of sums of money under POCA. She obtained what is believed to be the first restraint order in a private prosecution on behalf of a blue-chip company.

Rebecca has been instructed for the last 20 years in a very large number of drug trafficking and money laundering cases, involving various national and international law enforcement agencies. This has included prosecuting the largest on-land seizure of cocaine. The drugs had a street value of in excess of £65 million.

She has considerable experience of working with policy, training and various specialist teams, including those responsible for the gathering and handling of intelligence and witness protection. She also has extensive experience of Part 1 RIPA material and the use of undercover officers and informant involvement both in this jurisdiction and abroad. She is alert to the competing issues in relation to QE witnesses and is thoroughly familiar with all aspects public interest immunity (PII).

Rebecca has detailed knowledge of both Part One and Part Two of the Extradition Act 2003.

She is currently instructed in a series of high profile and complex cases acting for the Russian Federation. Rebecca is familiar with Article 3 issues arising from political and human rights (including Prison Conditions) conditions within that country.

She has recently successfully acted for the US Government in a complex case involving the selling of counterfeit cancer drugs in the USA and a manslaughter case.

Rebecca is regularly instructed in before and on behalf of Regulators and Regulatory bodies. She has experience in preparing cases and pleadings for tribunals.

Her fraud background gives her the ability and experience to assimilate and present complex and data dense material in a comprehensible, persuasive and simple manner.
Rebecca has considerable experience of prosecuting and advising upon matters relating to financial service, anti-bribery & corruption and money laundering regulations within the private and public sectors.

Rebecca is currently instructed as lead counsel with a junior, by the Financial Conduct Authority (FCA) to act for them, to prosecute an Insider Dealing case.

In 2012 Rebecca was appointed to the Attorney General’s Regulatory List of prosecutors which includes the Health & Safety Executive, Office of Rail and Road and the Environment Agency.

She is regularly instructed by the HSE to advise on and prosecute companies and individuals for breaches of health and safety regulations. This has included cases where individuals have suffered both life changing injuries and cases where a fatality has occurred as a result of the breaches. Rebecca has gained considerable experience in prosecuting cases involving asbestos.

Rebecca is instructed on a regular basis to represent the General Medical Council (GMC) at fitness to practice hearings. She is very comfortable, in part due to her undergraduate degree, in dealing with the medical reports, terminology and papers, associated with medical expert evidence. Her fraud background has resulted in her being able to assimilate and present complex and data dense material to a tribunal in a comprehensible, persuasive and simple manner

She also advised on matters arising from the Duggan Inquest (the shooting which triggered the London summer riots in 2011). [PRESS BBC]

Rebecca’s expertise on disclosure issues is wide. She frequently lectures on the subject to lawyers and investigators in the private and public sectors.

She is regularly instructed to run large and complex disclosure exercises. This includes managing teams of lawyers and investigators, advising on approach and drafting detailed disclosure management documents (DMDs).
She was instructed by the Serious Fraud Office to head the disclosure team of lawyers, investigators and junior counsel in their investigation into Rolls Royce PLC. This was the largest investigation that the SFO has carried out.

She was recently instructed by Eversheds LLP to head up the disclosure team charged with carrying out disclosure in a private prosecution on behalf of a multi-national Blue Chip company.

Rebecca is frequently instructed to act as Independent Counsel in the review of material to determine whether it attracts LPP. She has recently been instructed to review such material both at the scene of the raid and search and also once the material has been removed to a secure and appropriate location. She has been and is instructed in these exercises by the SFO, City of London Police and various Police Forces.

Rebecca is regularly instructed by government agencies and departments to act for them and to advise on a range of matters.

She is instructed by various government departments in cases before the Special Immigration Appeals Commission (SIAC).

She was instructed by the Government, in the “Kamoka” litigation (2018-2019), concerning allegations of rendition and ill treatment sustained in Libya, brought against the British Government.

Disclosure  a training programme delivered and written for the Department for Business: 2016- 2019

In April 2016 she delivered training to GMC lawyers and investigators on “Management Failings as a basis for a finding of Misconduct against a Doctor”.

Disclosure from both a Private Prosecution and Defence perspective: training session for Eversheds LLP and EMM LLP (2016) .

Management Failings as a basis for a finding of Misconduct against a Doctor: training lecture to GMC lawyers and investigators. (2016).

Member of Discussion Group on Review of Sanctions for Disclosure Failures: 2012: part of the process which culminated in the report by Gross LJ & Treacy LJ. Further Review of Disclosure in Criminal Proceedings: sanctions for disclosure failure (2012).

Lectures to Police and Customs Officers, on law, in preparation for the creation of the Serious Organised Crime Agency, and to SOCA officers on sensitive issues: 2006-2007

Response to the Review by Lord Justice Auld of the Criminal Courts: General Council of the Bar & CBA contributor (2001).

Rebecca has been spotlighted in Chambers & Partners 2021 for Private Prosecutions.

Standing Counsel to the Department for Business & the Insolvency Service- 2017 & reappointed 2020.